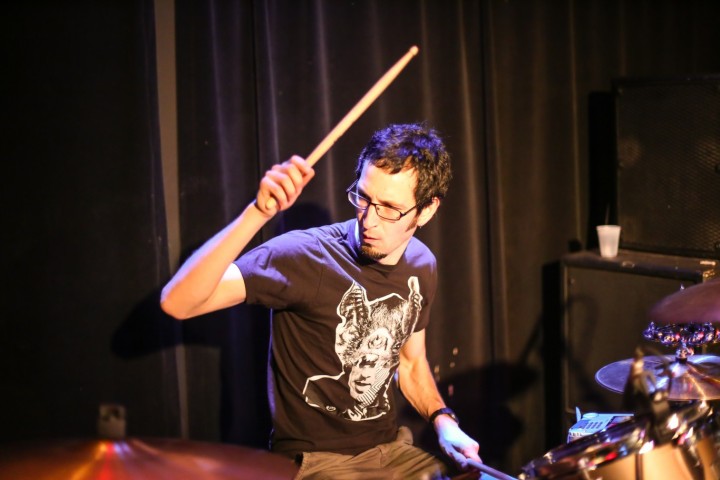 Riley O’Connor is a sought after Canadian drummer with a Humber background who is established as an international touring musician and session player in genres ranging from jazz, r&b and country to heavy rock.  Riley plays regularly with Toronto acts The Michael Schatte Band, Love Tapper, The Vegas North Orchestra and freelance with many others. Riley’s drumming is featured on The Edge 102.1, Much Music, CBC Television and Lionsgate Pictures. He has performed with many of Canada’s notable jazz musicians including Ted Quinlan, Shirantha Beddage, Brownman Ali and Jordana Talsky.

Born in St. Marys ON in 1979, Riley’s affinity for music began at a very early age when he discovered his parents record collection, and fell in love with the music of the Beatles, Pink Floyd and Rush. At age 7 he enrolled in piano lessons and within a year was playing award-winning performances at local Kiwanis music festivals. Around the same time Riley became a member of the internationally acclaimed St. Marys Children’s Choir. It was through this experience that he discovered the power of drums while performing a choral piece accompanied by jazz trio. Riley switched to drums age 10 and began lessons with Dale Brendon of Orchestra London. Within a year he was singing and drumming in his first band.

As a teenager, Riley was involved in several school ensembles, original recording projects and pro cover bands. Riley also played for local theater productions: Godspell, Grease, Cabaret and Jesus Christ Superstar. By the time Riley graduated high school he had established himself as a freelance musician in Stratford and London Ontario. At age 20, Riley spent the summer touring North America with Fresh Horses (a tribute to Garth Brooks) before enrolling in Humber College for jazz performance in 2000.

Riley studied drums privately with Ted Warren (The Boss Brass), Paul Delong (Kim Mitchell, The Code) and hand percussion with Rick Lazar (Loreena McKennitt, Samba Squad). By his second year at Humber, Riley was one of the top drummers on campus playing on many student recitals and recording sessions and made his first appearances at The Rex Hotel. During this time he also opened for country legend Billy Ray Cyrus. In 2002, Riley attended the Banff Summer Jazz Workshop where he recorded with saxophone great Chris Potter (Dave Holland, Steely Dan). In his final year of college he performed and recorded with The Humber Studio Jazz Ensemble. Riley received his Honors diploma in Jazz Performance and was awarded the Duke Ellington Scholarship Award.

In 2003 Riley began a 6 year stint with Toronto progressive rock group Braintoy and toured in Canada and the U.S. In 2003 he received the Emergenza Best Drummer award. Braintoy went on to record 2 critically acclaimed albums: Tremors (2005) and Vehicles (2008) which was produced by Andre Wahl (Mudvayne, Hawksley Workman) and mixed by Joe Baressi (Tool, Queens of the Stone Age). The late Edge 102 DJ Martin Streek championed Braintoy in Toronto by ensuring they received radio play on his show and also MC’d their packed CD release concert at Tattoo Rock Parlour.